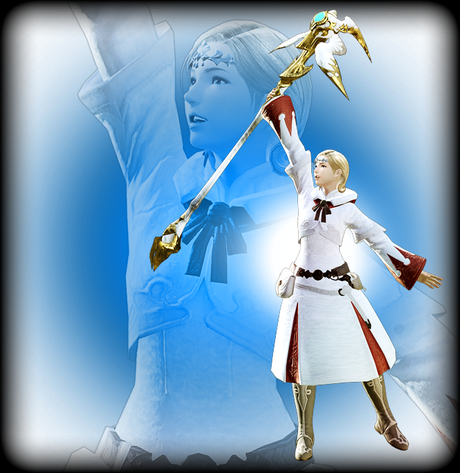 White magic, the arcane art of succor, was conceived eras past that the world might know comfort. Alas, man began perverting its powers for self-gain, and by his wickedness brought about the Sixth Umbral catastrophe. Although the art subsequently became forbidden, it is now in the midst of a revival at the hands of the Padjal, chosen of the elementals.

Those who would walk the path of the white mage are healers without peer, possessed of the power to deliver comrades from the direst of afflictions—even the icy grip of death itself.
Combat Role

White mages are powerful casters whose talents enable them to fully restore the HP of all party members in a mere instant. Beyond healing, they can also apply their MP towards attack magic, granting them extremely powerful offensive abilities.

Requirements:
Level 30 Conjurer and level 15 Gladiator.
As a conjurer, talk to Soileine of the Stillglade Fane (Conjurers’ Guild), located in Gridania (2,1). Complete the job quest “Seeds of Initiative,” and receive the Soul of the White Mage.

If you chat to learn more about FFXIV Power leveling message.